Documentaries don’t normally get as much attention as TV series, but this time Disney+ he wanted to go big and called Will Smith to guide us to the most extreme places on planet Earth… Welcome to Earth!

PLOT AND INFORMATION
The plot is very simple: Will Smith it will lead us to discover unknown and dangerous places on our planet. Will Smith the lead singer of suicide squad Where Willy, the Prince of Bel-Air? Yes, really him! In fact, Smith immediately warns us that he’s never done anything extreme in his life: he’s never swum in a lake, never climbed a mountain, just once slept in a tent. We will then discover with him that these places are not dangerous but only very different from the places to which we are accustomed, and they are unique realities that have much to offer and to tell if they are explored with respect, caution and above all in the company of experts.

The signed series Disney+ And National geographicproduced by Darren Aronofsky (The black swan, Requiem for a dream) And Will Smithconsists of six episodes of approximately 40 minutes each, all already available from December 8, 2021 on Disney+.

FIRST EPISODE IMPRESSIONS
In the first episode, Will Smith takes us to Mount Yasur, an active volcano on the island of Tanna in the state of Vanuatu, in the Pacific Ocean. Smith heads for the mouth of the volcano with Erik Weihenmayer, a climber who hides a secret that will leave you speechless. He waits for them at the top Jeffrey Johnson, a volcanologist eager to study the sound of Yasur, and the two will try to help him with his research. The theme of the episode is sound and its perception, and the adventures of the three alternate with spectacular explorations around the world, where other aspects of the main theme are explored. I immediately warn you that Smith is not participating in the other adventures and calmly tell us about it from a place more comfortable for him.
I don’t want to reveal the places explored, but it was a nice surprise to find our beautiful Dolomites of Belluno in the first episode and to see a scientist, led by a team of Italian explorers, sink into the mountains on almost 450 meters to record their sound. 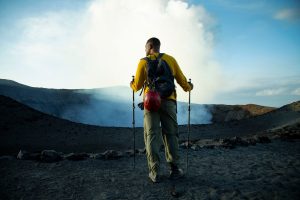 I guess he prefers aliens to volcanoes…

The places are breathtaking and the photography is beautiful and neat: it feels more like watching a film than a documentary. Even the soundtrack of Danil Pemberton (The Chicago Trial 7, Enola Holmes) pushes a lot in this direction, reminiscent of contemporary action films. Unfortunately, it must be admitted that the spectacular is sometimes disproportionate, and in the scenes with Will Smith the editing somewhat loses the “real” effect that one expects from a documentary.
I was very struck by the dimension of the story: the explanations are fascinating and accessible to everyone, thanks also to Smith’s humor and attitude. Adequate space is given to explore the human aspects of the adventures and the personal stories of those involved. There are also many moments when Will Smith, alone in a white room, speaks directly to the audience, sharing his wonder at living these new and particular experiences.

THE TEASER
We conclude as always with the trailer:

If you are a fan of Will Smith you can’t miss this documentary mini-series, and even if you don’t, I hope I convinced you to watch it; Personally, I can’t wait to start binge-watching!
Let us know in the comments if you liked it or not, and keep following us because we have a big exclusive dedicated to this series in store!

Musician lost among books and television series. He starts thousands of things and lately I write music and lyrics. Fed on ITASA and around the world.