Derby County fell to defeat on the road as they were beaten 2-0 by AFC Bournemouth at the Vitality Stadium.

Cherry forward Dominic Solanke scored the game’s only goal from deep in first-half stoppage time to ensure the Rams left the South Coast without a score.

Solanke capitalized quickest on a stray ball in the penalty area to fire home, but Derby threatened for much of the game.

The Rams created chances, notably through Lee Buchanan and Ravel Morrison who were both denied by Bournemouth goalkeeper Mark Travers in the second half, but Jamal Lowe secured the points in the final minute as he converted at close range to seal the three points for the Cherries. 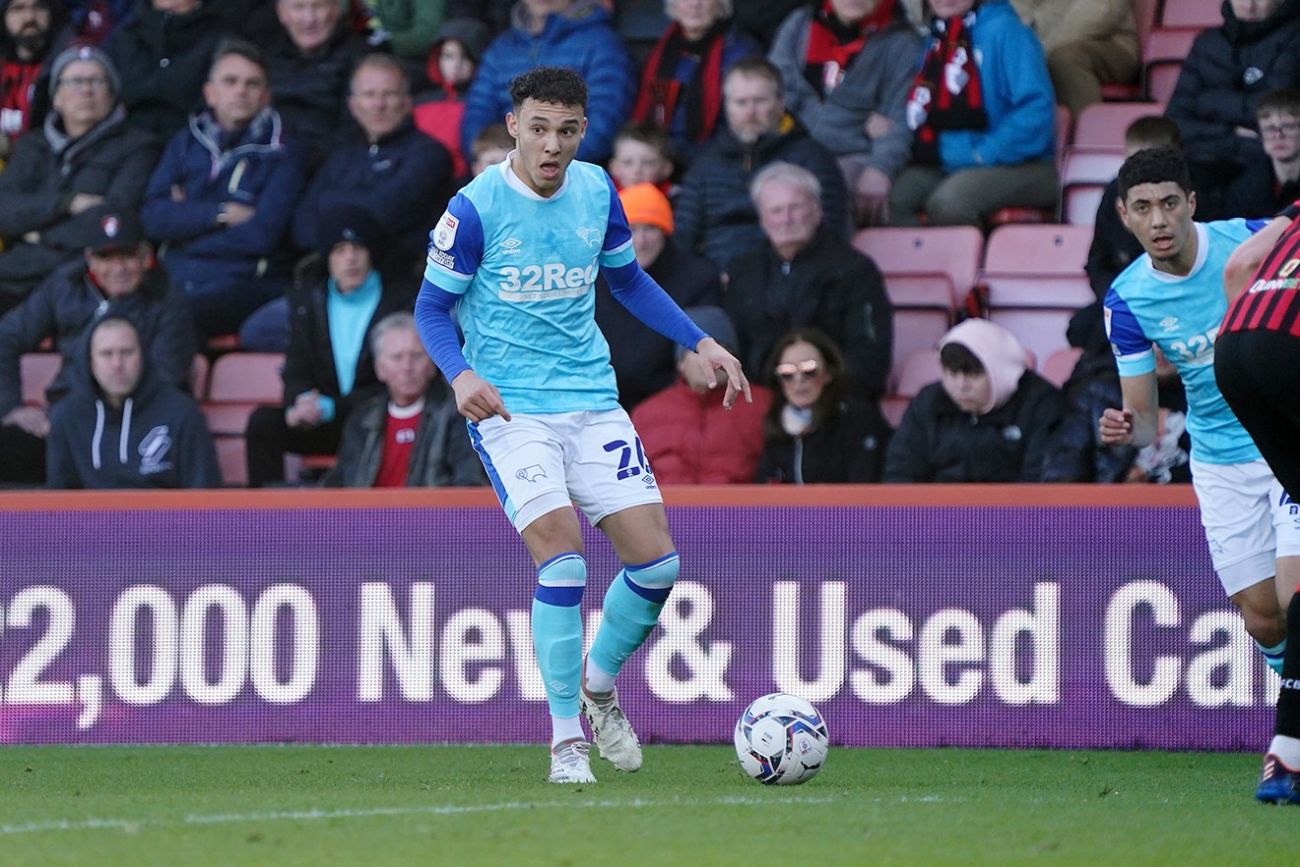 Manager Wayne Rooney has made a change to his side since the win over Barnsley seven days before as Lee Buchanan replaced Festy Ebosele.

And it was an early defender injury that disrupted the flow of the opening rallies, but it was Derby who quickly settled into the game.

Malcolm Ebiowei, in his second league start for the Rams, had the game’s first chance in the 12th minute, and it was a fine job from the youngster. 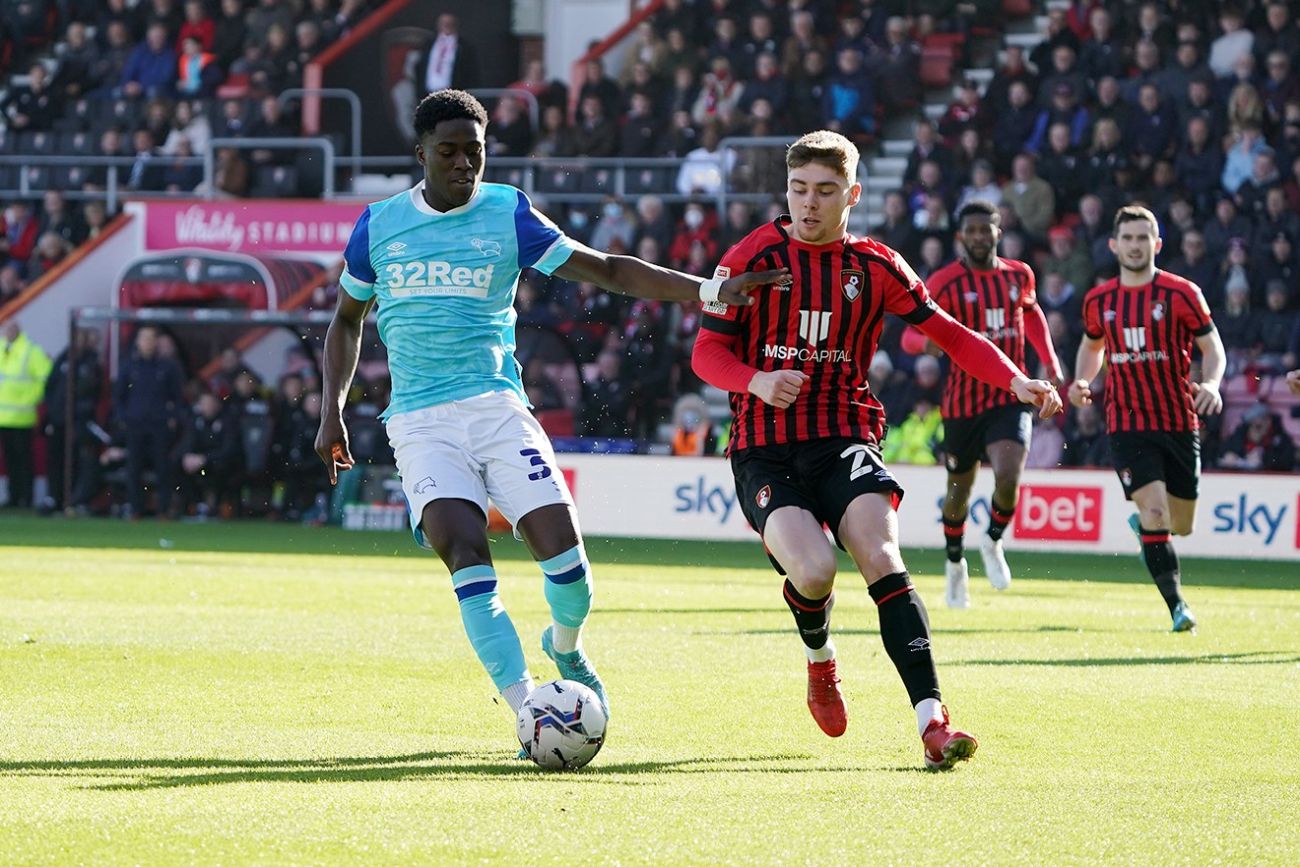 He jumped past Cherries duo Leif Davis and Jaidon Anthony and took a chance with his left foot, but goalkeeper Mark Travers matched his effort.

Bournemouth responded with their own chance, but Ryan Christie’s 25-yard free-kick crashed into the wall as Derby cleared the danger away.

The hosts were just beginning to assert themselves in the game and almost made the breakthrough midway through half-time.

Midfielder Todd Cantwell found space behind midfield and pushed the Rams defense. He fed Anthony who cut inside and fired but Ryan Allsop was on par with his effort which he tipped over. 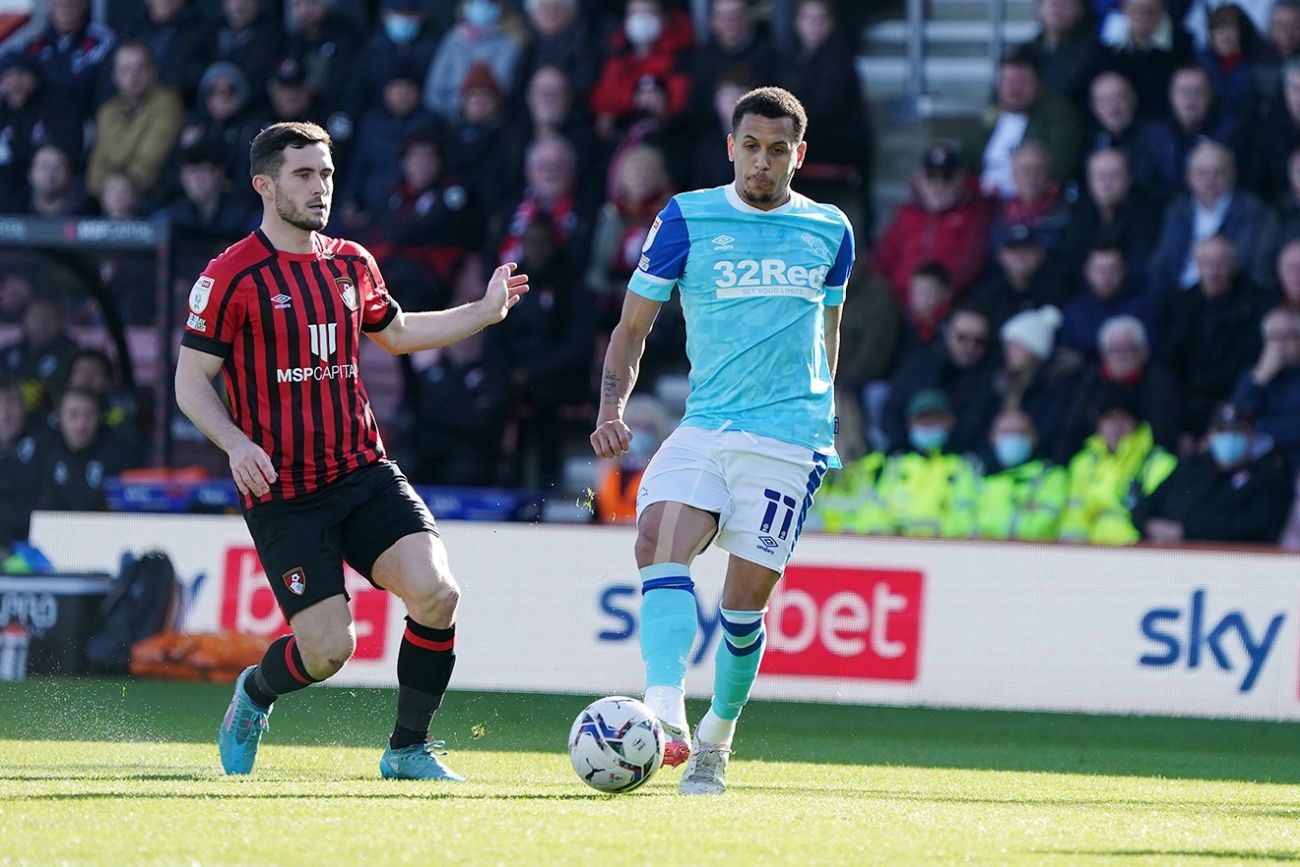 Then a moment of controversy ensued as Derby felt they should have been kicked for a foul on Ravel Morrison.

It was a good build job from the Rams who worked their way through the third before Nathan Byrne received the ball 25 yards from goal.

He found Morrison in the box and the midfielder appeared to be grabbed by Davis, but the referee brushed off Derby’s loud protests. 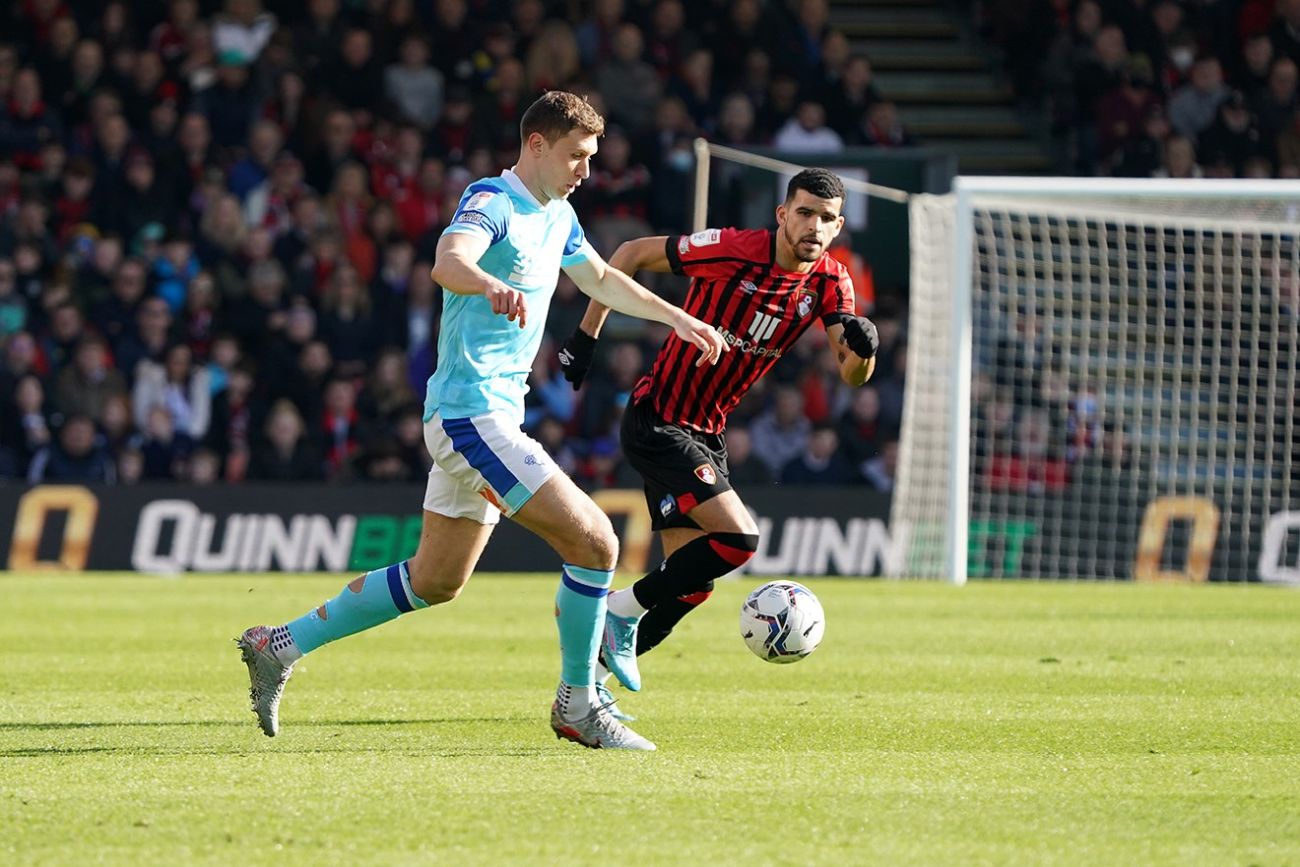 A pot shot from Tom Lawrence 30 yards from goal followed soon after, but it would be Bournemouth who finished the stronger half of the two teams.

It was also a sustained pressure, as Cantwell began to dictate much of the game, however, the Rams held firm. A counter-attacking move nearly saw Derby profit as Lawrence crossed for Luke Plange but he just couldn’t connect with his head. 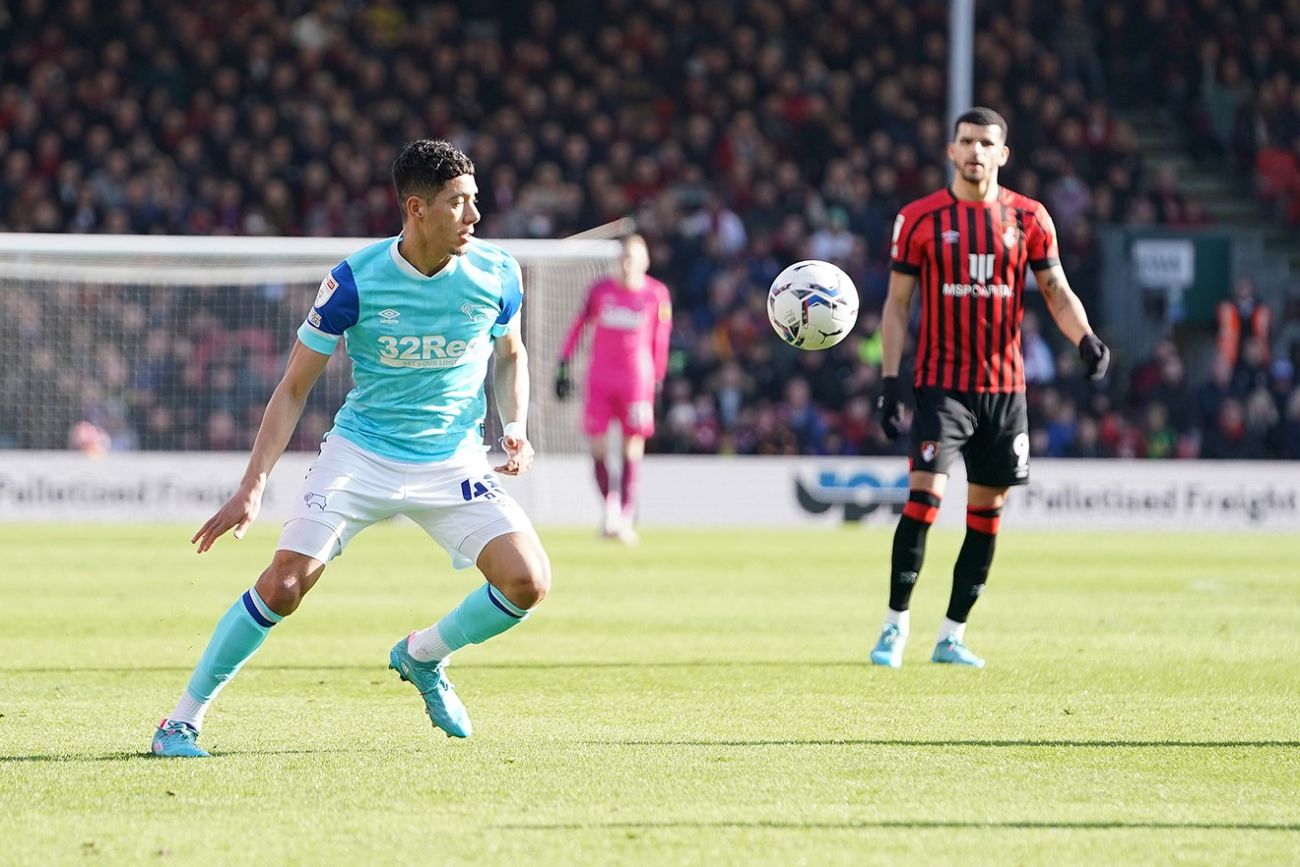 But, Derby couldn’t hold out until the break as Bournemouth striker Solanke fired the hosts ahead deep in first-half stoppage time.

Anthony received the ball in a wide area and passed a few players before the ball passed to the striker who made no mistakes to give the Cherries the lead at half-time. 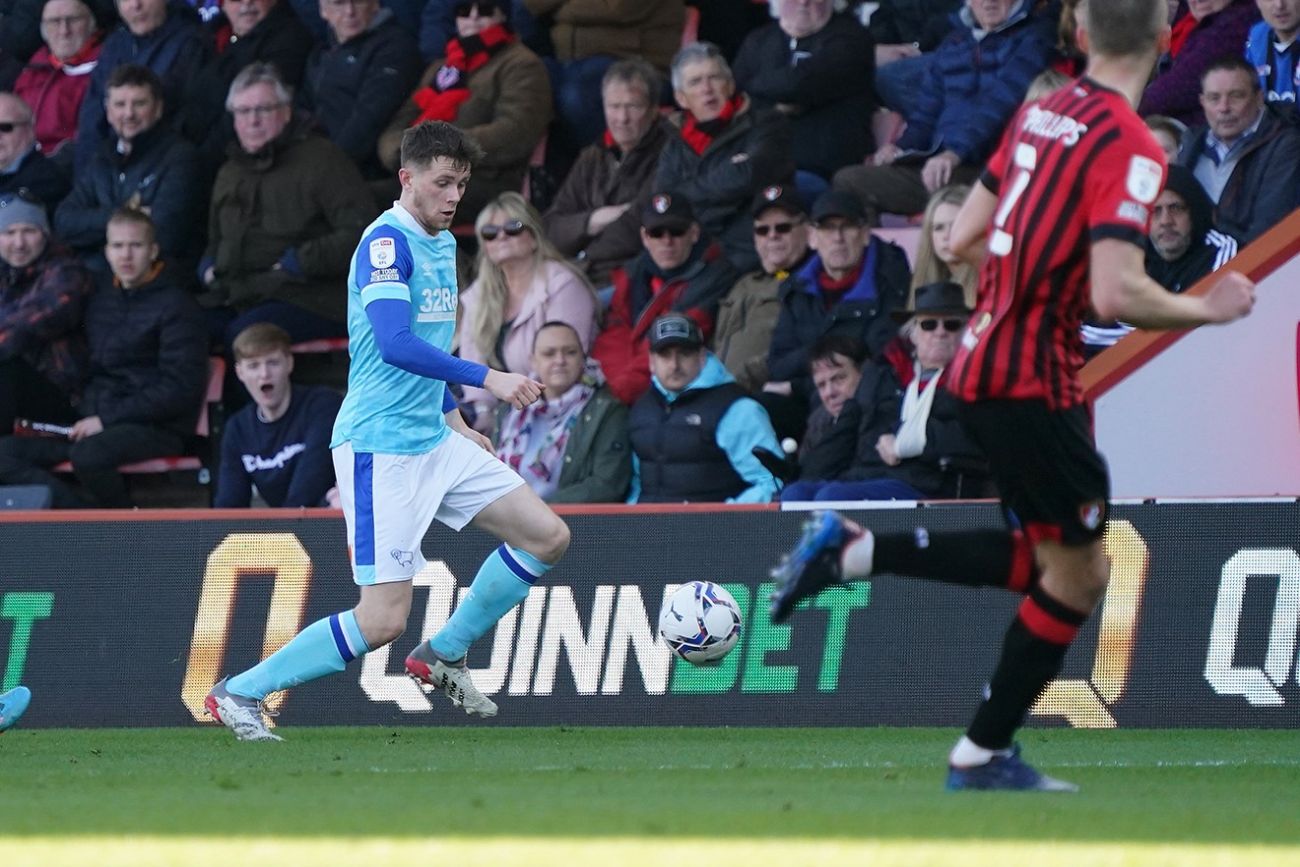 And, minutes into the second half, Solanke nearly doubled his and Bournemouth’s for the afternoon. He met a Christie corner at the near post and headed for the far corner, but Allsop’s strong palm denied the striker.

But, Derby grew into the half and started to put their hosts on the back foot. Lawrence sent a through ball to Buchanan on the left side and he fired, but Travers made a good save.

Shortly after, the goalkeeper was called into action again as Lawrence found Morrison in a promising area this time, but he denied the midfielder from close range. 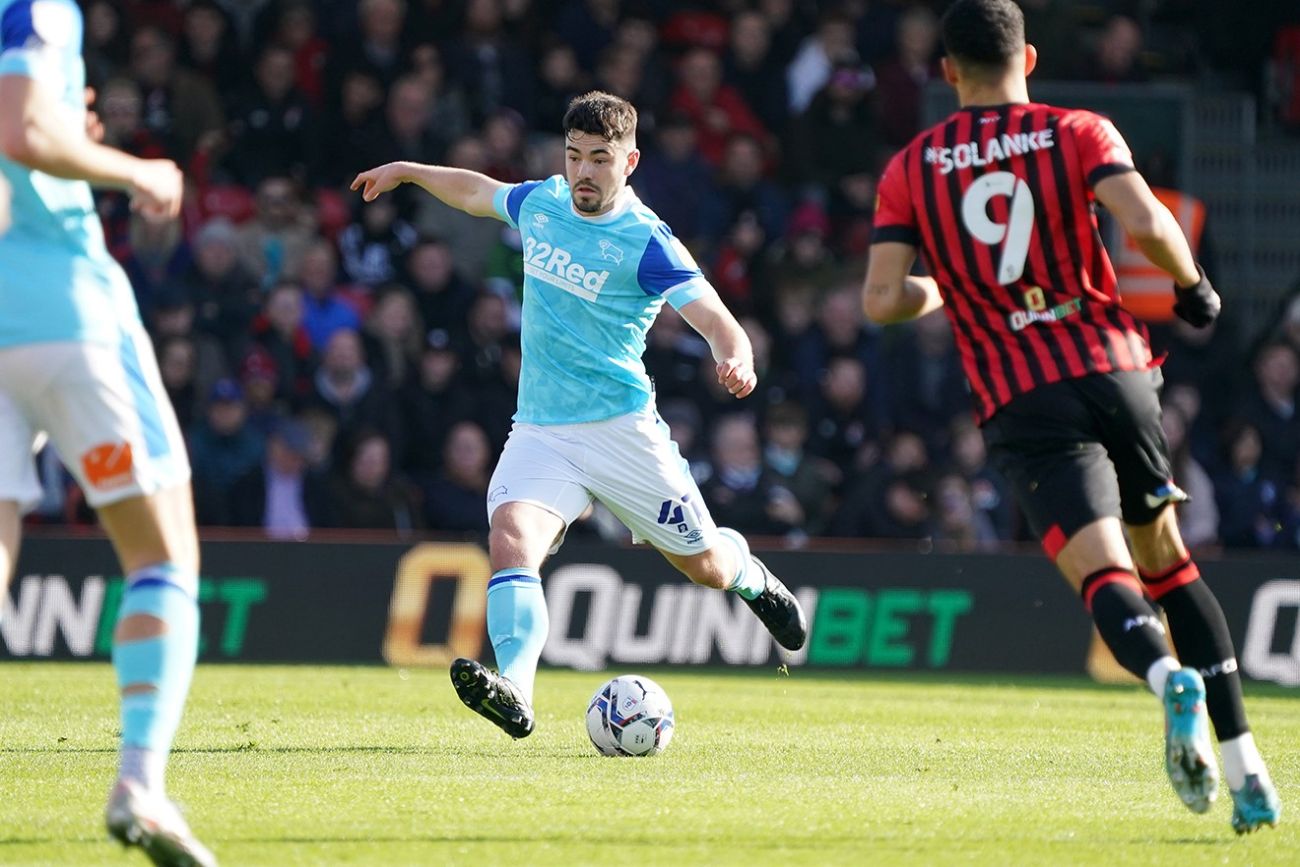 From the resulting corner the ball passed to Curtis Davies in the penalty area but substitute Jordan Zemura threw his body in the way and denied Derby an equaliser.

Derby kept the pressure on as Rooney turned to his bench and introduced Ebosele and Colin Kazim-Richards, but despite throwing men forward they struggled to break through a stubborn Cherries defence. 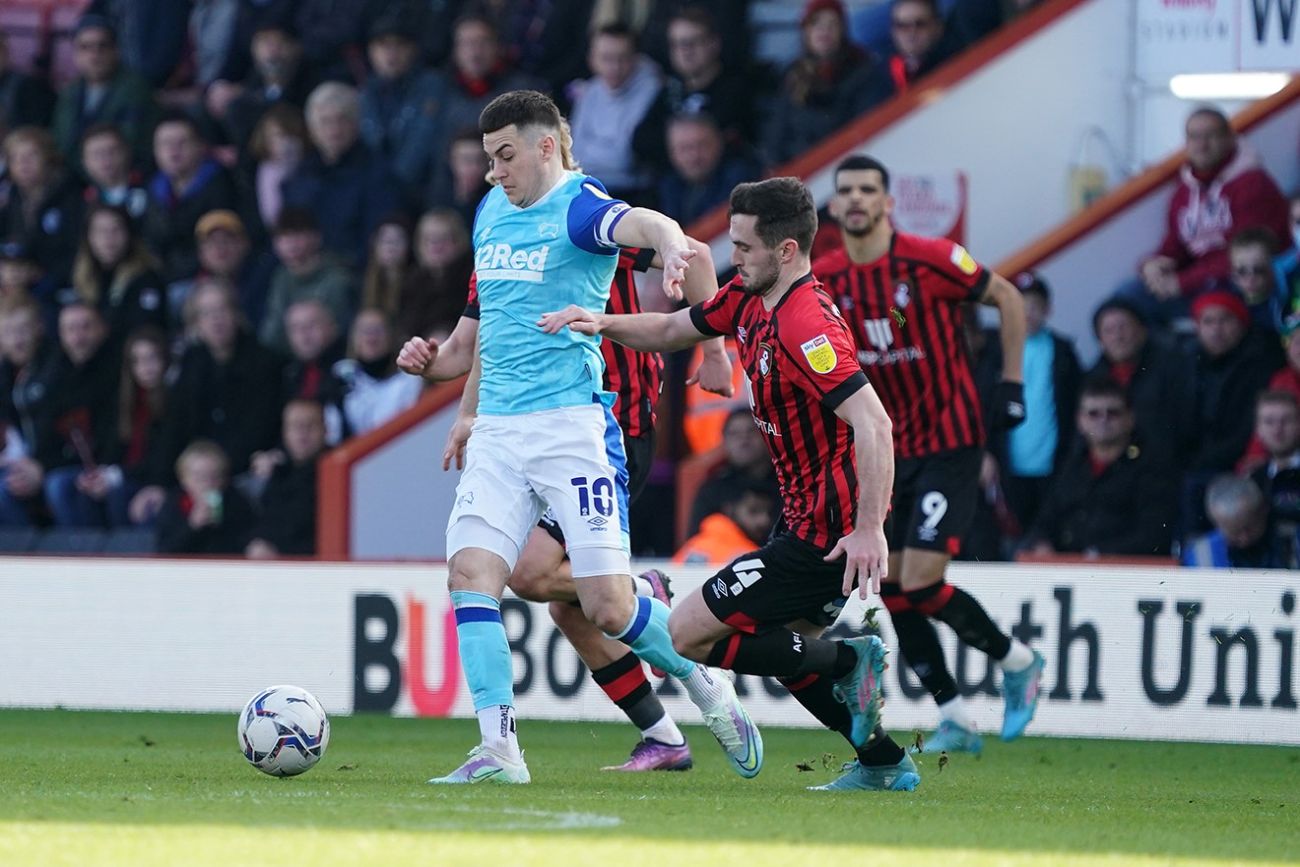 Despite throwing men forward, the odds dried up somewhat for Derby as Bournemouth took control of the encounter.

And they sealed the three points in the final minute of the game as Solanke found space at the edge of the area and forced a good save from Allsop but the ball popped for Lowe who committed no mistake from close range to seal the points.

Eiran Cashin thought he had scored a goal for Derby deep in time as he met Lawrence’s cross and finished well, but the linesman’s flag was in an offside position as Derby were defeated.